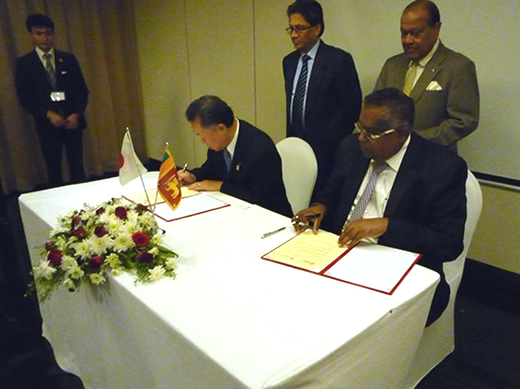 Kankeiren sent a Business delegation to India and Sri Lanka from October 18 to 24, 2015. The delegation headed by Vice Chairman, Mr. Masayuki Matsushita visited government authorities and economic organizations in both countries. In India, they met with H.E. Ms. Nirmala Sitharaman, Minister of Commerce and Industry, and H.E. Ms. Smt. Vasundhara Raje, Chief Minister of Rajasthan, and in Sri Lanka, they met with H.E.Mr. Rishad Bathiudeen, Minister of Industry and Commerce.

During the visit, Kankeiren concluded an Agreement of Cooperation with the Ceylon Chamber of Commerce in Sri Lanka.


Courtesy visit by Mr. Feliciano R. Belmonte, JR, Speaker of the House of Representatives of the Philippines 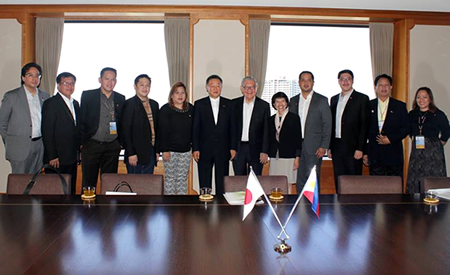 Kankeiren received a courtesy visit from Mr. Feliciano R. Belmonte, JR, Speaker of the House of Representatives of the Philippines and community leaders from Quezon City on September 28, 2015.
Mr. Masayuki Matsushita, Vice Chairman of Kankeiren and speaker Belmonte talked about several topics such as, Philippine's policy to invite FDI from foreign countries, utilization of PPP (Public- Private- Partnership), and ASEAN integration, etc.

The day before, the community leaders visited disaster prevention facilities as a Kankeiren Industrial Tour.


Luncheon Meeting in honor of H.E.U Thein Sein, President of the Republic of the Union of Myanmar 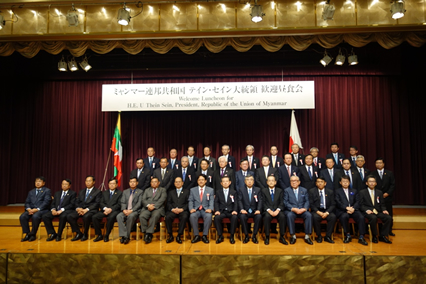 Kankeiren, together with METI and Osaka Chamber of Commerce and Industry, hosted a luncheon meeting in honor of His Excellency U Thein Sein, President of the Republic of the Union of Myanmar, in Osaka on July 6, 2015. President Thein Sein expressed his expectation for further expansion of Japanese investment and cooperation to Myanmar's industrial development. 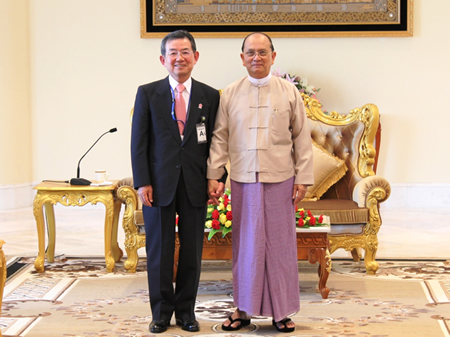 Kankeiren dispatched a Delegation to Myanmar and Cambodia from February 15 to 21, 2015. The delegation of fifty persons was headed by Chairman, Mr. Shosuke Mori, and visited the government authorities and economic organizations in both countries.
At the meeting with H.E. U. Thein Sein, President of the Republic of the Union of Myanmar, the delegation discussed several topics such as the investment environment and human resource development for further mutual cooperation between Kansai and Myanmar.
During the visit, Kankeiren concluded Agreements of Cooperation with The Republic of the Union of Myanmar Federation of Chambers of Commerce and Industry(UMFCCI) and the Cambodian Federation of Employers and Business Associations(CAMFEBA).

Meeting with H.E. Mr. Prayut Chan-o-cha, Prime Minister of the Kingdom of Thailand 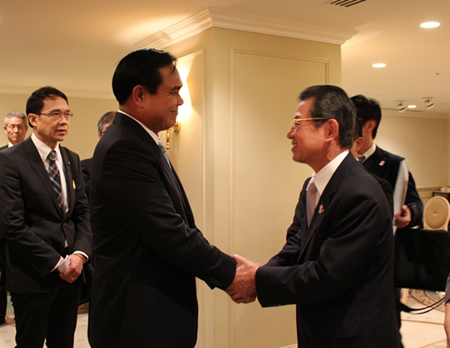 Kankeiren, together with four economic organizations in Kansai, hosted a lunchen meeting with H.E. Mr. Prayut Chan-o-cha, Prime Minister of the Kingdom of Thailand in Osaka on February 10, 2015. H.E. Mr. Prayut expressed his expectation for the further expansion of Janpanese investment.